Epic Movie directed by by Martin Scorsese, written by Paul Schrader – this movie is the adaptation of of Nikos Kazantzakis‘ controversial novel “The Last Temptation of Christ” (1953).

If you are an accepting person, you should definitely watch this movie TILL THE END. It depicts the life of Jesus Christ in a way no other movie did. The script departs from the commonly accepted biblical portrayal of Jesus’ life and is not based on the Gospels. You will not be watching the same scenes you’ve always watched – well, you will but in a whole different approach. That’s why (obviously) I wont be mentioning the synopsis. 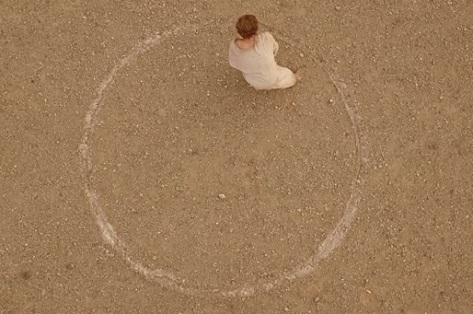 Somehow we always think of Jesus Christ as the savior, the hero, God: The Closest-to-Perfect Human Being who has ever lived. However, this movie shows us the human aspect of Jesus that would verify him asking God (before the prophecy was fulfilled):

“Father, if you are willing, remove this cup from me. Nevertheless, not my will, but yours, be done” in Luke 22:42

Somehow that pleading Jesus has human attributes, is tempted, is scared, and suffers just like all of us humans.

“I’m a liar.. A hypocrite
I’m afraid of everything
I don’t ever tell the truth
I don’t have the courage
When I see a woman
I blush I look away
I want her but I don’t take her
For God, and that makes me proud
I don’t steal
I don’t fight
I don’t kill
Not because I don’t want to
But because I’m afraid
I want to rebel against you
Against everything
Against God but I’m afraid
You want to know who my mother and father are
You want to know who my God is?
Fear.
You look inside me and that’s all you find.
Lucifer is inside me; he tells me you’re not the son of king David
You’re not a man; you’re the son of man and more
The son of god, and more than that God.” – Jesus

Willem Dafoe (playing Jesus)’s reactions are remarkable in the movie – not exaggerated at all – just perfect. There are scenes of suffering, it’s all breath taking/ not annoying though. Barbara Hershey (playing Mary Magdalene) is gorgeously seductively remarkable. Her role earned her a Golden Globe for Best Supporting Actress nomination. Harvey Keitel (playing Judas)’s role was a bit weird. His strong friendship with Jesus made my human-brain feel like it was oddly intimate, not sure if that was intended. Keitel’s performance as Judas earned him a Golden Raspberry Award for Worst Supporting Actor nomination. LOL.
David Bowie plays Pontius Pilate – Cesar (More Reasons to watch this movie). I had no idea it was Bowie till I checked the internet. His familiar face was so young for me to recognize.

There is a scene where it shows that something had been going on between Mary Magdalene and Jesus before she became a ‘prostitute’. At one point, Jesus comes and rescues her from persecutors. It got me thinking how people judge each other and call each other names while in fact Jesus protected a what you call “whore” these days and held her under his wings.

Mary Magdalene has the reputation in Western Christianity as being a repentant prostitute or loose woman; however, these claims are not supported by the canonical gospels. The identity of Mary Magdalene is believed to have been merged with the identity of the unnamed sinner who anoints Jesus’ feet in Luke 7:36-50.

“If I was a woodcutter id cut it
If I was a fire id burn
But I am a heart and I hurt and that’s all I can do.” – Jesus

The shift in the movie is outrageous to some. I consider myself highly accepting to any kind of ‘art’ however, I myself got up and started walking around the house near the end of the movie just because I was bothered by the events of the movie. That’s where again I say WATCH IT TILL THE END. You might become restless, but wait, cause the ending is just perfect. A true masterpiece. Every single bit of it.

This movie might make you doubt your faith at a point, but I only see beauty in that. Once a doubt is recovered, your faith would be twice as strong. Once your doubt controls you, it might just be part of your spiritual journey.

“Even if he didn’t the word is still important.
Why?
Because people believe them.” – Paul

This movie makes you realize that even Jesus’s disciples ran away while he was walking to be crucified – your friends bailing on you because you got weak is nothing original. It might just be a common ground between you and Jesus (if you got ditched) or between you and the disciples (if you ditched). Both ways, you’re fine.

Finally, this movie shows us another example of a trick we always fall for – something that is mentioned in the bible over and over again but we never even doubt. It is that the Devil comes in ‘sheep’s clothing’. (SPOILER!) Religiously speaking, the Devil was once God’s angel and that is what he will disguise himself in before he approaches any of us.

“There is only one woman in the world. One woman, with many faces.”

A Must Watch!
With Love!
M