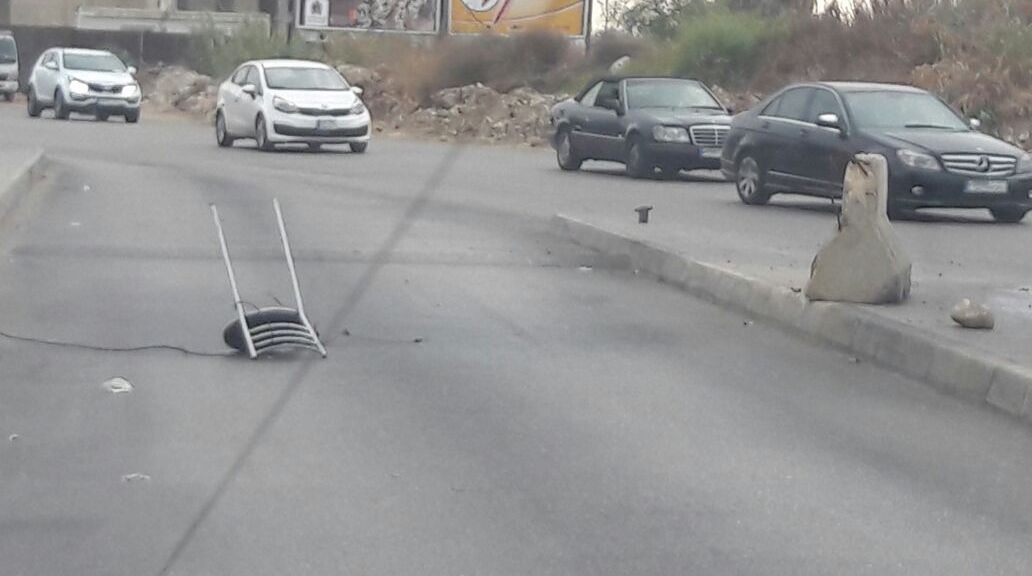 Okay, I am writing this FULLY cause of my mom’s request.

She sent this to me earlier today by whatsapp: 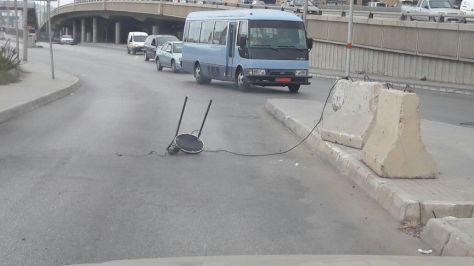 A picture of a chair blocking the road at the Antelias Highway.

I thought of creating a meme with it, comparing roadblocks in other countries and road blocks in Lebanon, then I thought of the Lebanese Private sector.

It is not fair to say that we, Lebanese People, are far behind, because WE are not. Whoever takes care of THIS in Lebanon are VERY far behind. Whether it is the municipalities, the police, or the government. This is not a roadblock, this is a drunk chair in the middle of the road and it is only Wednesday.

The private sector however has advanced entrances and ‘roadblocks’. We are not underdeveloped as citizens, all our homes are Hi-Tech; our education is better than any other country, our styles are modernized and urban, it is our “system” that is not keeping track. I am so sure that people in our government open their garage doors with a click, yet block our roads with a high stool from Maamelten.

I will be updating this article with a couple of entrances to media houses and private institutions in Lebanon with a better infrastructure (you can send me some images too).

Hoping for a change by the people for the people. #V

People often tend to attribute Wissam Saliba’s success to his father (Ghassan Saliba)’s success. We cannot deny that people have always admired Ghassan Saliba’s stage performances, strong presence, and massive charisma; being a legend’s son definitely adds a lot to one’s acceptance and love by the society. However, knowing Wissam for quite a bit now, I can certify that his success is not simply inherited.

Why is Wissam this loved and known by everyone?

Even though Wissam is on the bulletin boards and on TV, he isn’t stuck up and living in a cocoon. Instead, he goes out with his friends all the time, he has a healthy social life, he supports the local music and talent scene (which he often takes part of), he often eats at Helado (what?), and he is super nice to the fans who spot him.

During my interview with Wissam on Lebanese Memes, he stated that celebrities should not destroy their fans’ image of them by being mean or rude in their encounter. He expressed that he appreciates fans that just love to have a chit-chat with him instead of taking a picture and leaving (since he tends to live the moment and is not a fan of taking photos himself).

2. Wissam is a sophist

What I mean is, Wissam strives for knowledge and admires history and philosophy. That is, what I think keeps him ahead of his game: his education and culture. He is passionate about certain civilizations that some of us has never heard of, which creates his mysterious (energy) un-accessible (aura) and vivid charm that shows on stage and on camera.

He, and his brother Ziad, are also geeks (being movies’ walking encyclopedias); thus respected by the 90s kids and the Lebanese Geek Circle (like Iron Heyoka)

3. Wissam is a dreamer

Probably because he lived in L.A. for around 7 years and witnessed great success, Wissam is always looking forward for more. What makes some celebrities lose their skills, fans’ love, and sometimes even their sanity is having Gods-like attributes: over glorifying themselves, believing they’ve done it all, and taking their fame for granted.
Wissam works on satisfying his diversified talents and isn’t restricting himself to acting. He will soon start forming his own band, he is looking forward to having his own movie productions, and eventually dreams of owning a vineyard.

Wissam could have simply leveraged on being Ghassan Saliba’s son. Instead, he studied at one of the finest film academies in Los Angeles and constantly spends his spare time attending movie premieres, theatres, and watching DVDs. They say painting is learned at museums, so do the math (:

Also, Wissam does not limit himself to his roles on the big screen. We saw him on Kazdoura with George Khalaf, on Chi N N with Fouad Yammine, and recently on Lebanese Memes with myself (“)(^_^)(“) – soon on some other digital platforms.

Being this down to earth and adventurous will definitely take Wissam Saliba very far in his career.

6. Wissam is attached to his roots

I accompanied Wissam in his trip to the GSS Scouts (which he was a member of) Camp in Majdel Akoura, his homeland. I realized how much Wissam is proud of his roots, how much he loves nature, and how much he misses being in Scouts; probably the reason why he came back to Lebanon, with a good fluent Arabic accent; making us all proud!

7. Wissam loves and supports his family

Finally, one can’t deny his love and support to his brother, Ziad Saliba (the script writer, musician, and actor), to his cousins (that he always surrounds himself with), and definitely to his father.

How did Wissam Saliba make it? He developed his skills, pursued his dream by studying what he loves, took advantage of all the opportunities that came his way like Celerbity Duets, kept his feet on the ground, strived for knowledge, kept his love for his country, and didn’t decide to live in a deserted island.