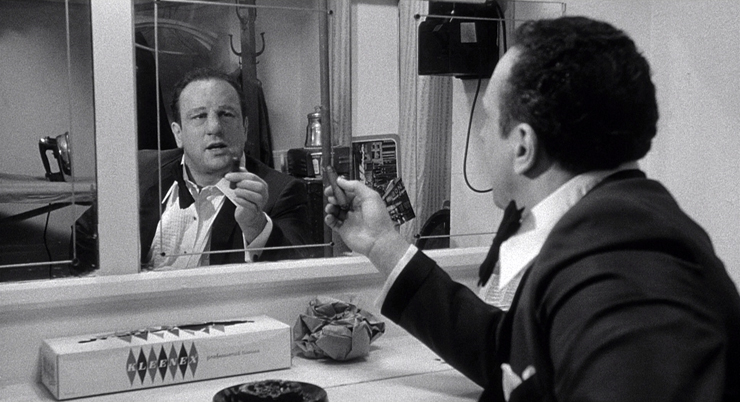 What a true classic! This movie tells the story of every rising star. Robert De Niro playing Jake has his brother Joey as his manager. He is a boxer who does not only win all other boxers but also has a chance to winning the championship; he is feared by all other boxers, but according to Joey’s calculations and connections, Jake cannot do it without the mafia – Salvy Batts.

Later on, he retires and opens his own bar, and gets behind bars because of letting a 14 year old in. All that was nice and all, but the movie only gets good when he sights his brother randomly, follows him, only to discover that he is no one now. That’s where he realizes that it was his brother, who got it down-hill since that game when he made himself lose.

The monologue Jake performs in front of the mirror gave me goose bumps.

“It was like a peak you reach, and then it’s down hill. It was you Charlie. You was my brother. You should have looked out for me a little bit. You should’ve looked out for me just a little bit. You should’ve taken care of me, just a little bit, instead of making me take those dives, for the short end money. You don’t understand. I could’ve had class. I could’ve been a contender. I could’ve been somebody instead of a bum, which is what I am. It was you Charlie.”
Champions are born to be champions, champions don’t lose – but there are always people around them that are intimidated, jealous, and suspicious. The road to success is the hardest and most stressful, and usually people with talent depend on those around them to look out for them and to handle ‘other people’, that is when their managers, brothers, cousins, and friends fail them. Most ‘stars’ are poorly handled and misled with the wrong manipulating minds all the time, those who do not see the far picture.

Stars and champions are destructive perfectionists; they hate themselves when they don’t get what they want their way. Jake in the movie does not really fight the championship fight because he felt he does not earn it – he gave in to the mafia, and lost his reputation and his family along the way.

But again, there IS a movie to Jake’s story and this man’s last scene is him preparing for a show – anchoring with “I’m The Boss, I’m The Boss”; after seeing his brother walking like a no-lifer, Jake remembers that he IS BOSS. A person like him can be hindered, stopped, persecuted, thrown in jail, boo-ed, cheated on, deceived, but he would rise up every time and prove to the world that a champion cannot be stopped.

(check out my other movie reviews on the category “M & Movies”)