You can totally rap up the whole movie by saying Zac Efron is effing hot, and you should watch him strip – almost rocking some Magic Mike moves – but I’ll go further in this. For the guys and men who are into lil’ girls, there is a bit of Selena Gomez there too. It’s not the brightest of movies, but since I watched it, here it is:

Zac isn’t in college anymore, his gay-best friend is getting married and he has to move out. He finds the perfect refugee: A House where Shelby (Chloe Grace Moretz) and two other freshman girls (Kiersey Clemons and Beanie Feldstein) are starting a cool-sorority “Kappa Nu” that actually throws parties unlike other sororities that can only attend frat parties (organized by guys).

Next door however, are Zac’s former enermies: the Radners (Seth Rogen and Rose Byrne). Those who have seen Neighbors 1 know a bit about their psychology, I’d advise watching Neighbors 1’s trailer, however you can totally catch up if you haven’t.

The Radners are expecting a baby and are trying to sell the house. According to them, there is no way they can sell it with crazy sorority parties happening in the house near them.

Zac starts out helping the Sorority raise money and get big, then he takes the old people’s side and decides on tearing it down with the Radners. 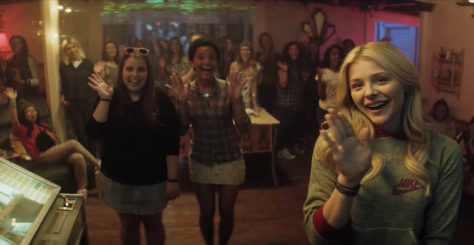 This Movie is 18+ at Cinemall and definitely targets university students; not a lot of wisdom messages there but here are a few things you might learn from Neighbors II:

Moreover, this movie shows all the homophobes out there that a homosexual guy can still be (best) friends with a straight guy. It exists and you shouldn’t be so paranoid and narrow-minded about it. Chill, no one’s going to rape you.

Two, this movie caters to those female college students that are not bimbos and hoes. They Exist. Somehow, college movies always classifies the girls into either lifeless church nerds or straight dumb b*tches. This movie is an Easy-A kind of college-movies that show girls who love to party but don’t need those 7-minutes-in-heaven and tequila-punches kind of parties.

Also, (unlike Hollywood movies in the 90s) the three girls starting the sorority (or is it Sorortity?) are not all blonde; one is blonde, the other is African American and the third one is ‘fine’ looking and overweight. They’re all cool. The blonde is still the dominant leader, but they’re all best friends and there is no bossing around. I love that Hollywood is shifting the 90s stereotypes and being more real.

Enjoy the strip!
Much Love!
M